Catherine the Great had 22 historically verified lovers throughout her reign. However, the legend (propagated by hand-wringing Protestants) that the Empress died in an attempt to mount a horse from below is untrue. #50shadesofneigh #checkyourfacts

Hope you all are doing well. I’d like to thank everyone that came to the HSA Research Brunch yesterday: the sixth floor of Leacock honestly feels warmer/stickier than a mid-July Piknic Electronik, but I’m sure the food and presentations made it worthwhile. Because the HSA is a tireless event-churning machine, we have another event this week, The Last Dance in the Garden of Eden. I’ve received a lot of questions about “what to wear” to the party, so I’m just going to outline the dress code in one sentence: this is basically Halloween for historians. Clothing is required (the event takes place after Adam and Eve get modest), but feel free to come as any character from the last few thousand years. If you’re bringing a date, I would suggest coming as a great historical couple (i.e. the Roman Emperor Caligula and his senator/horse Incitactus, Sodom and Gomorrah, any Habsburg monarch and his niece, etc.). Or you can come as an iconic character, and let historical fanfiction play itself out (I expect to see Lot’s wife throw a drink at Joseph and his stupid technicolor dreamcoat). Or you can just slap on a pair of animal ears and call yourself a lascivious mouse (duh!) scurrying around the Garden of Eden. Just come, polish off your two free drinks, and have a great time: I can guarantee that it will be super fun. See you all there!
The Main Events 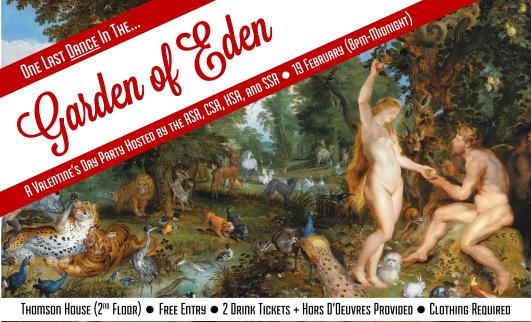 The Last Dance in the Garden of Eden
Thursday, February 19 (7pm-12am)

The night before Adam and Eve were expelled from paradise forever, they decided to get all the party animals in the Garden of Eden together one last time to throw it down…The ASA, CSA, HSA, and SSA proudly present our Valentine’s Day extravaganza: Last Dance in the Garden of Eden!!!!

To all the Debbie Downers questioning the factual authenticity of the theme, I can assure you that it is firmly grounded in historical fact. Let me elaborate. After the whole awkward apple incident, God needed to give 30 days notice to evict Adam and Eve, in accordance to the regulations of the Eden Régie de Logement. Therefore, on the day before their eviction, the now modestly dressed (but still fun) couple had a wild farewell party with all of the [party] animals in Paradise before being expelled to a world crawling with sin and midterms. Look it up.

Wear your chillest Garden of Eden Garb and a prize will be awarded for best costume! (No nudity please, earthy and demure is best!) If you enjoyed Menage a Toga, prepare to relive that classy and fabulous event, but this time with a sinful twist.
Applications for Important Things

Historical Discourses is Looking for a Cover Editor!
Deadline: As soon as possible

Historical Discourses is seeking a cover artist for it’s 29th annual publication this spring. The cover art should include the name and edition of the publication but there are no other requirements. Be as creative as possible! Please send all submissions and questions tohistorical.discourses@gmail.com.

Do you know an outstanding Professor, Advisor or Teaching Assistant in the Faculty of Arts? Don’t delay, nominate them for an AUS Teaching Award! Please fill out the nomination form here (http://ausmcgill.com/en/wp-content/uploads/2015/01/AUS-Teaching-Award-Nomination-2015.docx) and submit it to the AUS VP Academic at academic.aus@mail.mcgill.ca by Thursday, February 26th, 2015. Winners will be announced at the Awards Reception in early April.

South Africa in the Spotlight – Analysis of a Deeply Divided Country: Documentary Screening and Informal Roundtable

On Wednesday, February 18, 2015; Standpoints, the ASSA and the IDSSA, with the help of a presentation by Professor Jon Soske (History) and the screening of the award-winning documentary Miners Shot Down, will try to shed light on the complicated and deep-rooted problems that haunt South African society and many other regions of the Global South!

Professor Soske will use his extensive knowledge of modern African history and personal experiences made in South Africa to explain the change in the South African political and social sphere since the end of Apartheid in 1994. After this we will be showing the documentary Miners Shot Down by Indian-South African director Rehad Desai that will give an account of the Marikana Mine massacre in 2012, which is widely regarded as a turning point in South African history.

Snacks will be served. This event is open to the public, so feel free to invite friends, family, and the interested!
Vernissage & special talk with Dr. Desmond Morton: The No. 3 Canadian General Hospital (McGill) in the First World War 1915-1919 & The Lighthalls: A McGill Family at War
Wednesday 25 February, 5-7pm (McLennan Rare Books Room, 4th Floor)

March 2015 marks the centenary of the mobilisation of the No. 3 Canadian General Hospital (McGill), a 1040-bed unit of the Canadian Army Medical Corps. Located in France behind the front lines, the hospital was established by McGill’s Faculty of Medicine and staffed by faculty members and students, with nurses trained at the Montreal General and Royal Victoria hospitals. The hospital served in the field from 1915 to 1919. Please join us on February 25th at 5 pm, when distinguished Canadian military historian and Hiram Mills Professor of History Dr. Desmond Morton will speak on the role of McGill medicine in the First World War.

This talk titled “Healing in Hell: McGill Medicine and the First World War” will be part of the vernissage of two library exhibitions: “We Will Remember Them: The No. 3 Canadian General Hospital (McGill) in The First World War 1915-1919” and “The Lighthalls: A McGill Family at War”. The evening will include guided visits of the exhibitions.

A young Shakespeare struggles to pen his next play, finding inspiration from a betrothed noblewoman who enters his life unexpectedly. This film is delightful, with incredible scenery and costume design.

Professor Wes Folkerth will be joining us to discuss the historical context of Shakespeare in relation to the Oscar winning film, exploring historical accuracy and attempting to understand Shakespeare’s true nature and personal history. You definitely won’t want to miss this opportunity to learn a little bit more about Elizabethan England & theatre!

The screening will be at 6pm with a discussion to follow

We will be providing free snacks as usual!

Need FREE essay help? Bring a draft to the AUS Essay Centre! Our tutors will help proofread and edit your essay.

Stop by the Jack Daniel’s Conference Room (located at the back of the Arts Lounge) during our drop-in hours (12:30-1:30, Monday through Friday). French essay help is also available. If you would like to meet with one of our tutors but cannot make the drop-in hours, email aus.essay.centre@gmail.com to set up an appointment!

Since its establishment, the McGill Mentor Program has assisted hundreds of students in their search for advice, direction, and a glimpse into what the future may have in store. This program allows students to choose from over 700 possible mentors based on industry, employer, city, or degree. It is a valuable resource for students who wish to establish professional ties with those who can offer advice about their career options and information about jobs, organizations, and industries.

The first issue of Voces have been released and can be picked up in the language lounge at 688 Sherbrooke or online at http://issuu.com/clashsamcgill/docs/voces_final_upload

From that, we would like to start accepting submissions for our next issue. We are looking for papers written about Caribbean and Latin America or Hispanic Studies. You are not required to be in the program or have taken a specific course related to our association only that you have written a paper related to these topics.

We are accepting submissions from papers written in class or an independent paper you may have written. More details on the submissions and what to submit are located at https://www.facebook.com/clashsamcgill on the top pinned post. Keep note that the extended deadline is FEBRUARY 28TH and send submissions to voces.mcgill.2015@gmail.com

The HSA and You

As always, if you have any questions, concerns, or comments, please contact your benevolent leaders!